Districts (yellow names) - you have to go or fly through the area at least once to complete one of the challenges. Each Region has its own set of Districts. More information can be found on the Districts Maps pages or on the Exploration page.

Landmarks are special points that you must find and activate. This is needed for Challenges. They can be found, for example, on high towers or inside buildings.

Finding Hidden Places is needed to complete Challenges. You do not have to explore the whole maze, just go to it and go out to pass the challenge.

Possible location of the chests, its respawn is random (they appear and disappear randomly in time).
Chests contain items with quality depends on your level and difficulty level of the Freeplay mission.

Arcanist Runes: Hidden Messages, Footsteps of Idris, Vassa’s Triumph.
You have to finish See in the Dark Quest to see them, do not start to collect them before finishing Finding Old Friends. They are not random, they are one-time find. Start new character to recreate them for challenge and trophy. Read more at Arcanist Runes

In these places you can start the game in Freeplay Mode.

Nestled between the Sundric Sea and the mountains, Northern Bastion has a plethora of Shaper constructs and historical Legion of Dawn architecture, including the Fortress of Dawn. The population of this area has depleted greatly since the tragic destruction of Freemark and the subsequent mass exodus of the Arcanist settlement of Shadowmark. Fort Tarsis, the halfway point between Antium and the cities of Freemark and Heliost respectively, is the only settlement that remains in this area.


Regions of Bastion in Anthem 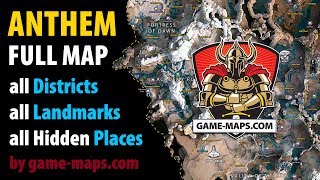 Full Anthem Map with all Districts, all Landmarks, all Hidden Places, Challenge Guide