Maps for Anthem with location of All Districts, Landmarks and Hidden Places for Exploration Challenges.

Pilots level up by earning experience points (XP). At various levels, a variety of awards are unlocked, including Forge slots, match consumables, and new javelins.

Versatile Javelin - jack of all trades. Focus on precision and damage.

Commonly used by frontline fighters, this reliable javelin has well-rounded offensive and defensive capabilities due to an even balance of armor and speed. The Ranger's propulsion pack can launch quick air strikes on unsuspecting foes, as well as navigate challenging terrain during exploration.

The Storm is the latest in javelin design, using embercored seals to harness the power of the elements. Its ability to float above combat compensates for its light armor. Operated by a skilled lancer, the javelin's lightning, ice and other elemental attacks make it an invaluable tool against the Dominion.

Created as a scout-suit for explorative and diplomatic missions, the Interceptor is the most agile and acrobatic javelin a lancer can find. Lightning fast, close-range attacks combined with specialized weaponry will thrill lancers who crave speed on the battlefield.

Heavy and Big, is good at defense, melee combat and long-range artillery.

This heavily armored javelin is a cornerstone of human society and is used in various occupations, including industrial work, deep-sea diving, and heavy transport. Though slower than other models, this javelin can withstand a punishing amount of damage. In battle, you can count on the Colossus to hold the line or disperse threats with its tremendous strength in close combat.

Javelin boosters generate heat while sprinting, hovering, or flying and can eventually overheat. Extend the time it takes to overheat by equipping specialized components, or by cleverly using the environment to cool off. Flying into water or through waterfalls is a good way to quickly rid a javelin of excess heat.

If not overheated, flight can be engaged any time while a javelin is in the air. Javelins fly in the direction they are facing.

Underwater, a javelin is limited only by its oxygen supply. That supply can be extended through component upgrades. The controls for swimming work like flying-javelins swim in the direction they are facing.

You can increase the health of your javelin's armor and shields by acquiring more powerful upgrades. The same is true for the damage that your javelin inflicts. Other sources that enhance your health and damage include inscriptions, consumables, and pilot skills.

Each type of javelin has base armor and shield values that scale relative to the highest level upgrade equipped, ignoring rarity. A javelin's defenses are bolstered by each equipped component, so a component with a higher power level will accordingly provide greater defense for the javelin.

Upgrades that deal damage, such as weapons and gear, have their damage scaled relative to the level of the item.

Enemies will scale their health and damage relative to your difficulty setting and the highest level upgrade equipped by your javelin, ignoring rarity. They also scale relative to each player, meaning the same enemy will often show different values for two players who are grouped together.

Weapons and gear launch various attacks on enemies, including unique combos which can cause devastating damage. An experienced Freelancer knows that strategic use of the right gear can control the battle and defeat the enemy.

FIRE: Sets enemies on fire. Causes them to burn and take additional damage over time.

ICE: Freezes enemies. Restricts their movement for the duration of the effect.

ELECTRICAL: Electrifies enemies and turns them into conduits that disperse arcs of electricity and shock nearby enemies.

Weapon and gear descriptions will indicate how quickly these effects are applied. Different enemies have varying resistances which protect them from particular effects, and determine how long each takes to apply.

When an enemy has an effect on them-shown as a nameplate icon-launch a combo with weapons or gear that have combination properties. Different types of combos and effects will produce damaging results.

A javelin's appearance can be customized using the Forge. New paint jobs and appearance options can be applied to suits, giving them a unique flair and style.

New appearance options are unlocked with Coin and Shards in the Forge or at Prospero's store.

Prestige can be earned by completing Challenges or engaging the Weekly Alliance System. Any appearance options you earn, unlock, or purchase can be used by any of your pilots. Once unlocked, the items are yours forever.

Upgrading at the Forge

Equipment swaps and javelin upgrades can be done at the Forge once guns and gear are found in the world. As a pilot levels up, more javelin customization slots will unlock.

Equipping higher-level items will raise your javelin's power level, which is reflected as a rarity level. Higher-level suits find rare and powerful items more often, and can tackle missions at higher difficulty levels.

Exploring the World of Anthem

Missions are story-based encounters that allow players to experience the danger and drama of being a Freelancer in Bastion. There's no shortage of threats to Fort Tarsis. It's a Freelancer's job to defend their people from the hazards of Shaper relics, hostile creatures, powerful enemies, and much more.

Each completed mission guarantees rewards, as well as a Freelancer feat that grants additional experience points.

Freeplay allows you to explore the far reaches of Bastion on your own terms. Whether it's fulfilling contracts outside Fort Tarsis, or exploring the jungle for resources, you decide how you'd like to tame the wilds.

Once you've unlocked Freeplay, you can launch an expedition at any of the Freeplay start locations on the map, at any difficulty.

During Freeplay, you may encounter World Events, gather plant and mineral resources needed for crafting, meet other friendly lancers... or even discover hidden secrets waiting for a brave explorer to find.

People you meet in Fort Tarsis will sometimes need your help and offer you contracts. These contracts are repeatable, randomized expeditions.

Strongholds are some of the most challenging expeditions for Freelancers. These threats to Bastion are serious enough that they require a focused team of Freelancers working together in order to succeed. Strongholds cannot be played privately.

Completing challenges unlocks special rewards such as blueprints of javelin upgrades at the Forge, javelin appearance options, or both.

Each challenge can be completed once, with subsequent rewards available for any of your pilots. The list of challenges appear in the cortex. Some challenges are available only for a short time, while others are hidden in the game, waiting to be discovered.

On their adventures, Freelancers can perform feats in honor of Legionnaires who fought alongside General Tarsis. Each feat bonus lancer's reputation and provides valuable experience (XP).

Feats are earned once per expedition and provide your group with added experience (XP). Feats can be tracked through the cortex (under Challenges) or through your inventory.

Receive loot by successfully completing missions and from sources lil defeated enemies and treasure chests. The specific loot is only reveal once an expedition is completed, but includes javelin upgrades such a weapons, gear, and components. Once revealed, items can be equippe at the Forge.

When defeating enemies, there's always a chance that loot will drop. Powerful enemies, Elite enemies, and Legendary enemies all have an increased chance of a drop.

Treasure chests will also drop loot. The quality of the chest determine the number of possible loot drops. Chests can be found while exploring during missions or Freeplay, but also upon completion of Freeplay events or major Stonghold encounters.

Loot drops have a maximum rarity that is determined by the players current pilot level. At Level 1-9, drops are Uncommon rarity; Level 10 are Rare; Level 20-29 are Epic; Level 30+ are Masterwork. At Level 30 there is a small chance that Legendary items will drop instead of Masterwork items.

Independent lancers who chose to follow General Tarsis and the Path of Valor. They silence cataclysms and aid those in need beyond the safety of the walls. Freelancers act without direct orders from any central organization. Though there is no official code, the modern perception of Freelancer values is attributed to Dalathie's The Freelancers Three.

Valor to serve the people, regardless of their station. Courage to bring silence when the Anthem sings. Faith to keep my word and the word of my brethren. Trust that the free answer when called. Strong Alone, Stronger Together.

The expansionist, military regime from Stralheim that destroyed the city of Freemark when they attempted to control the Cenotaph. While their technological advances are noteworthy, their methods have shown little regard for life or individuality.

Arcanists are scientists, researchers and scholars who study the mysteries of the world, from wildlife to Shaper instruments. While some are found teaching in classrooms, others spend their lives solving Shaper mysteries in the wilderness. They have long preserved the collected knowledge of humanity and consider their studies a spiritual and moral duty.

After the destruction of the library of Dunar, Arcanists published a common book of accumulated learning, known as Concordance. It stands as the their most prolific work and a new edition is published annually.

A sentient manifestation of a Scar swarm. Once a swarm has reached a critical mass through consumption, it can spawn an Escari, an advanced Scar capable of speech and intelligent thought. Compared to regular Scars, Escari are individuals with unique thoughts and ambitions that are thought to lead to Scar power struggles. These disputes make Escari eager to augment and improve themselves as they see fit.

The first Escari was discovered at the Battle for the Terraces leading a coordinated attack on farmers, burning the fields below Fort Tarsis.

A colonial swarm of insects that mimics the dominant life-form in an area. Scars first appeared from a Cataclysm in 413 L.V. At the time, Freelancers defeated a large, vicious creature none of them recognized. Later, unknown to Freelancers, the Scars regrouped and changed their mimicry to appear human.

As one of the first eyewitnesses stated: "This wasn't just four or five insects. This was thousands! An entire colony working together to make arms and legs... to make heads and... eyes. They became people!"

Scars then hijacked striders, cobbled together technology from scrap. and searched for Shaper relics. Inventive scavengers, they left nothing behind. As Arcanist researcher Hanni Blythe stated, "Empathy towards Scars is foolhardy, for their primary concern isn't domination or survival, but mindless, thoughtless consumption. They're a scourge, a plague upon this world."

Cyphers are individuals with a sensitivity to the Anthem of Creation and are capable of telepathic communication and heightened mental calculation. Many young people who are identified as having this unique gift undergo ember exposure and dedicated training to enhance their mental skills.

When cypher abilities first appeared, Corvus sought to use these individuals for covert purposes. They developed amplifier technology and created a type of institutional training center called a Satomi. The most important and advanced of these is Esteraat, the premier Satomi located in Antium.

Later, the Cypher Revolution brought cyphers expanded rights, freedom to choose how their abilities were used, opening a new world of communication between settlements and in the aid of lancers. While javelins were invented long before the cypher phenomenon, the addition of cyphers to operations outside the wall has made all lancers safer and more effective. 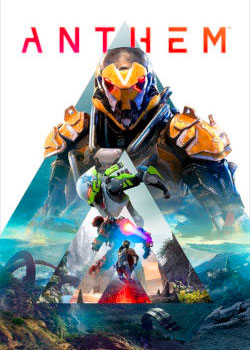 Upon an unfinished world, humanity struggles to survive in a savage environment full of diverse threats. Equipped with incredible Javelin exosuits, a faction known as the Freelancers seeks to tip the balance in mankind’s favor. Anthem Game Guide