A man lies resting against the wall, lit by the dim illumination of the fading sconces. He has a gaunt, foxlike aspect, and his face is pale and damp with sweat. One arm is held loosely against his side, sleeve soaked with blood. He gives you an anxious glance as you near, his features twisted with pain.

Lord Raedric has decided to rededicate Gilded Vale's abandoned Eothasian temple to a new deity. The entrance to the temple has been cleared, allowing entry for the first time in many years.

Inside the temple, I encountered a man called Wirtan who wishes for me to search the ruins for the remains of Eothasian priests he tells me Raedric's guards slaughtered many years ago.

Wirtan mentioned that the temple is full of secret compartments, and that I will likely find the remains on the lowest floor of the temple. Wirtan also warned me, however, that the temple has become infested with spiders and skuldr.

The nearby crystals light the cracked mosaic floor in shades of orange, and at certain angles the metallic symbol beneath your feet gleams gold.

As you look on, the air shimmers, as if with summer heat. The very dust and air seem to pull together, until a thin, glowing mist appears before you. In its rippling gleam you sometimes think you can see the shape of a man, features rendered in broad strokes of air and smoke.

This parchment is relatively intact, but the ink upon it has faded. You can make out a few patches of careful, tidy script.

"...isitors to the ritual floor. Rectrix Obrica says... demption for even these... orgot and struck the largest bell first, rather than second..." The rest is illegible.

"Mother - I have asked Brother Edric to carry this letter to you, for he travels to New Heomar come morning. With him goes what coin I have, and I hope it will ease the surprise of an unexpected homecoming - for I mean to follow in a few days' time. Our village is much changed, and though I do not wish for you to worry, I do not feel it is safe to remain. I know Rectrix Obrica will not approve, but -" (The letter trails off here.)

I have seen some manner of spirit within the temple - or a memory, at least. In this memory, I recalled an Eothasian rite involving the ringing of bells. The first and last of these tolls, apparently, is that of the 'Right Hand', which has a distinctive, warped tone to it.

I did not notice it at first visit

"I understand your concerns, Sister Nedra, but we are safest here within the temple. What wrong have we done? Lord Raedric would not risk his position by harming us, when we have brought so much prosperity to the village. Wirtan pretends at alarm. He knows full well that these are empty threats, and means to frighten us into departing our home. Are we to abandon Gilded Vale to heretics? Wirtan too, will play his part, when the time comes. Our temple will stand long after Lord Raedric's hold is but gravel and memory." - Rectrix Obrica

The door to the lower floor appears to be sealed with some enchantment. There is a set of bells beside the door which may play a part in opening it.

To open doors use RIGHT, MIDDLE, LEFT and RIGHT Bell. 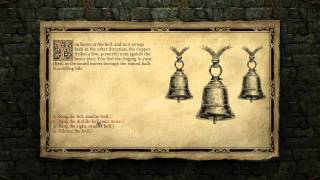 Stairs back to Ground Level

Find the remains of the Eothasian priests.

I have descended into the lower level of the temple. If Wirtan spoke true, then the remains of the murdered priests are down here somewhere...

ITEM: Valve Use it

This letter is fairly intact, though the parchment itself has been crumpled. "Gjestr - I know that the temple baths boast great healing properties, and that your back ails you still. Still, I would ask that, if you are to indulge for the greater part of the day, you give over your key to the sanctum to someone else for safekeeping. This is not the first time we have been forced to wait to perform the day's rites, and Rectrix Obrica is often too far below to hear our knocking."

... showed me a vision of what happened in the temple many years ago - and what part Wirtan played in it. Confronting him may provide me with some measure of the whole truth.

The vision I saw in the depths of the temple showed me the truth of the priests' fate. Wirtan confessed to his part in it once I confronted him. He could not say what moved him to keep silent when the temple was sealed, trapping the priests within, but the crime seems to haunt him still. I chose to let him live. Perhaps in time he can come to terms with what he has done, and make amends.

Location - An in-game location; POI (Point of Interest). The sequence of numbers shows suggested order of visiting the locations.

Starting Quest Location - This is the location where you find the quest giver. It can be an item, a person or a place.

Entrance / Exit - Exit from this location/map or Entrance to another location/map, house, dungeon, area, cave, etc.

Secret - You have to be in "Scouting Mode" to discover secrets. It can be a hidden switch, a chest with treasure, a secret door or just a hidden item.

Container - Chest, box, crate or other container that can be plundered for useful items.

Worth Checking Out - Items and places that are out of the ordinary or just worth checking out. These are also items you must use.

Traps - You have to be in "Scouting Mode" to discover a Trap. Traps can be disarmed if your character has the appropriate skill.

Common NPC - Some of them have their own stories that you can learn by using the "Reach out for the soul" option.

NPC Quest Givers - Important NPCs; they give us Story Quests, Quests and Tasks.

Enemies - Hostile NPCs; Animals and Monsters. They attacks on sight.

Bosses - The most difficult Enemies; Bosses or enemies that are hard to kill at this point of the game (i.e. when you first encounter them).