You came here from Encampment (Prologue).

I have narrowly escaped the strange and deadly wind that tore through the valley. But now I am trapped in the ancient ruins that the caravan master told us to stay clear of.

I will have to find my way through the ruins to get to safety.

Heodan needs rest. There may be a quiet corner of the ruin where we can set up camp. Calisca, however, thinks we should keep moving.

SPOILER: If you want to read main spoiler for this location look at end of this page

If you will make camp in this dungeon to rest Heodan, Calisca will left your party.

by TrueMasta
"You can just talk with small lizard in the bottom right corner of the map, then go away and return with a piece of meat from one of the monsters and talk to lizard again and it will take meat and give you a spear"

This small folio is torn in several places, and blood has soaked into several of the sheets. One later entry is still legible, however:

'I can't believe my luck. A few rounds of dice, and I've got my hands on a genuine Engwithan artifact. Fellow who had it said it was a pretty nothing, as far as he's concerned - he's not willing to go digging in some ruins. But if he's right about this gem leading to a hidden treasure, then that's worth sneaking past a few painted elves.

I'll head to Cilant Lis in the morning. Then it's just a matter of finding this relief he was talking about.

This brilliant blue gem has been sculpted to look like an eye.

Use Hammer and Chisel to weaken the wall.

This is lethal trap, do not cross it yet.

Use waterskin to clear off the ooze. You got waterskin from Encampment.

Turn on Scouting Mode and find secure path through mosaic. 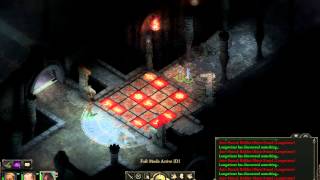 It does not matter what you will do with Heodan and Calisca your companions, they will die shortly after leaving this location. Sorry.

Location - An in-game location; POI (Point of Interest). The sequence of numbers shows suggested order of visiting the locations.

Starting Quest Location - This is the location where you find the quest giver. It can be an item, a person or a place.

Entrance / Exit - Exit from this location/map or Entrance to another location/map, house, dungeon, area, cave, etc.

Secret - You have to be in "Scouting Mode" to discover secrets. It can be a hidden switch, a chest with treasure, a secret door or just a hidden item.

Container - Chest, box, crate or other container that can be plundered for useful items.

Worth Checking Out - Items and places that are out of the ordinary or just worth checking out. These are also items you must use.

Traps - You have to be in "Scouting Mode" to discover a Trap. Traps can be disarmed if your character has the appropriate skill.

Common NPC - Some of them have their own stories that you can learn by using the "Reach out for the soul" option.

NPC Quest Givers - Important NPCs; they give us Story Quests, Quests and Tasks.

Enemies - Hostile NPCs; Animals and Monsters. They attacks on sight.

Bosses - The most difficult Enemies; Bosses or enemies that are hard to kill at this point of the game (i.e. when you first encounter them).