Welcome to The Reach Enter the Reach for the first time.

The Reach Master Explorer Discover and clear all caves and striking locales in the Reach.

Master of Storms Disrupt the Harrowstorm at each ritual location in the Reach.

Few adventurers choose to brave the rocky highlands of the Reach. Savage predators, perilous Dwarven ruins, and hostile Reach clans make it one of the least hospitable regions in all of Tamriel.

Markarth DLC is a part of Dark Heart of Skyrim, year 2020 Gothic Adventure in The Elder Scrolls Online, you have to stop a powerful Vampire Lord from enslaving Tamriel.

Delves are solo-able dungeons found throughout the world. Delves will always contain a single skyshard and a boss who drops item set gear.

The Reach Points of Interest

Points of Interest are self-contained stories that explore the lore, characters, and locations within a zone. These can award you with experience, gold, and gear. 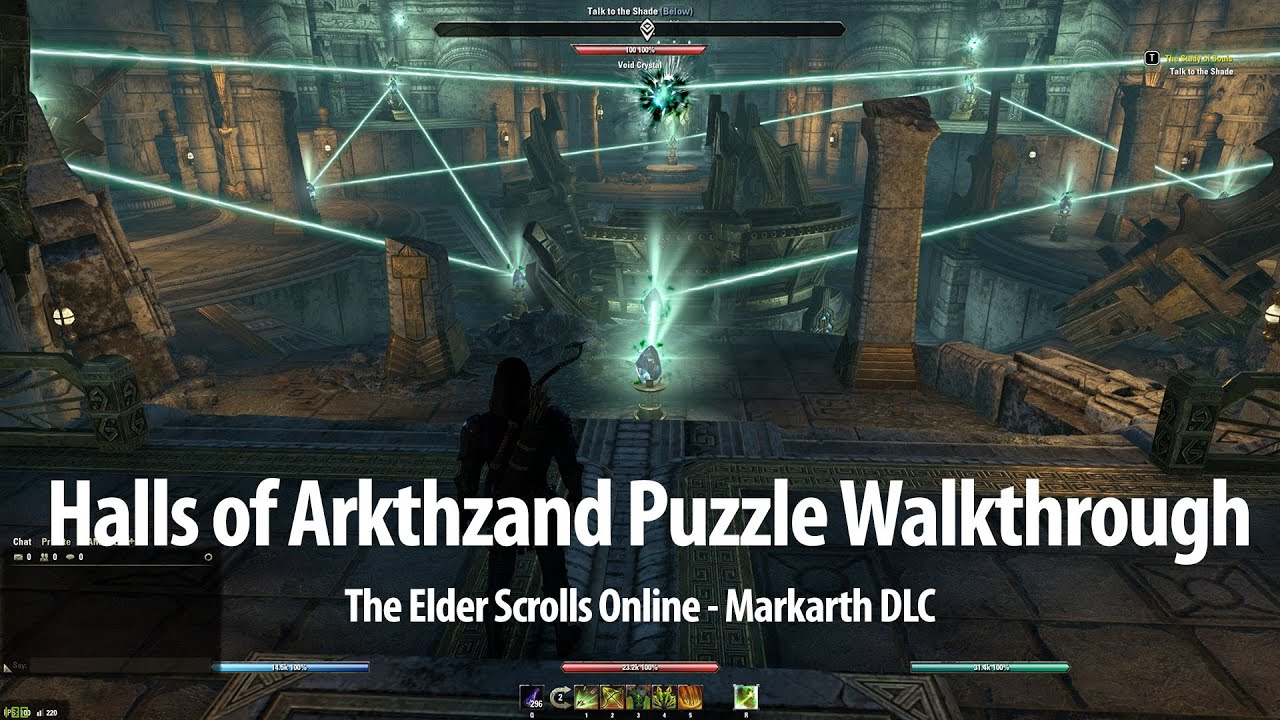 Wayshrines allow free, instantaneous travel between wayshrines that have been discovered and unlocked. You can also travel directly to any unlocked wayshrine from anywhere in the world for a small amount of gold.

World Bosses are difficult enemies meant to be tackled by a group of adventurers. Defeating a world boss can award you higher tier gear.

Discover all the striking locales in The Reach & Blackreach: Arkthzand Cavern.

Solo Arena in The Reach

Set Stations are locations in the world where you can craft items with specific item set bonuses.

Discover all 6 Skyshards in the Reach and Blackreach: Arkthzand Caven.

Skyshards are scattered throughout the world and can be identified by the bright beam of white light they emanate. Discovering three Skyshards will grant you a skill point, which can be used to unlock or morph new abilities.

Player Houses in The Reach

Shalidor's Library Books are scattered throughout the world. These books are identified by their distinctive purple glow. Discovering these books will improve your Mages Guild rank and advance the associated skill line.

The Despot of Markarth

Count Verandis Ravenwatch seeks to uncover a plot to conquer the Reach by an army of vampires and werewolves that calls itself the Gray Host. To succeed, he needs to earn the trust of the region's sovereign: the dreaded Despot of Markarth.

Verandis encouraged me to begin my investigation by speaking with the nearby Reach sentry. She might give me an idea as to what type of information Ard Caddach would consider important enough to meet with us about.

Blood of the Reach

Lady Belain seeks a mysterious Dwarven relic called the Arkthzand Keystone for her ally, Rada al-Saran. Count Verandis wants me to find the keystone before it winds up in the hands of the Gray Host.

Verandis suggested that a local scrap dealer named Nolovan might be able to help us get a lead on the Arkthzand Keystone. While I find him in the southeast section of the city, Verandis plans to meet with Arana and the rebels.

The Study of Souls

Count Verandis Ravenwatch tracked Lady Belain and Rada alSaran to a mysterious Dwarven edifice. But with the keystone in hand, our enemies have a clear advantage. Braving this ruin and learning its secrets may be our best hope of stopping them.

I should meet Verandis at the sprawling Dwarven ruin across the river from the exit out of Bthar-Zel.

Arana believes that her former clan knows about dark Reach magic and old prophecies. If I can find the Ghostsong clan and convince the witches to share their lore, I may learn what Lady Belain plans for the Reach.

Arana suggests meeting with Bradan, a Werewolf from her estranged clan, at a place called Hroldan Ring. I should find the meeting spot and see if Bradan can get us a meeting with Nathari.

Gwendis asked me to meet Verandis at Nighthollow Keep, an ancient vampire fortress in Blackreach. The Dark Heart may be hidden somewhere inside.

A Feast of Souls

The Dark Heart has awakened and grows more powerful with every beat. While Verandis attempts to deal with Rada al-Saran, I need to go to Markarth and stop Lady Belain from sacrificing the entire city to the Void.

Verandis has asked me to go to Markarth and warn Ard Caddach. Instead of fighting back against the Gray Host, he needs to fall back and deny as many lives as possible to the Dark Heart.

The Reach Side Quests

A Challenge of Worth

A Reachman named Angair challenged me to complete a clan ritual called the Vateshran's Rites. He says it involves combat against creatures from Oblivion.

Angair told me to find his clanmate Caddgarn in Vateshran Hollows if I wish to perform the Rites. I should go there and speak to him.

A notice indicates that someone seeks adventurers in Markarth for dangerous work.

The notice directed me to talk to Consul Cardea in the Reach city of Markarth for more details.

Lyris Titanborn requested my assistance. She found something at the Reachwind Ritual Site and needs help solving a problem.

I need to go to the Reachwind Ritual Site and meet Lyris Titanborn.

Adusa-daro needs my help to rescue her friend Kathad from a clan of evil vampires known as the Lothid, and their leader, Boss Trenlor.

Adusa-daro wants me to meet her down below in the Dwarven ruins so we can find Kathad. The lift should descend into the cavern that houses the ruins of Reachwind Depths.

Endeavor in The Gloom

I met a recent recruit of the Psijic Order. He asked for my help investigating strange behavior in the local plant life, which he fears may be a result of his own errant magic. I agreed to accompany him into the cave to take a closer look.

I examined the strange vegetation. I should speak to Psijic Calis and find out what he thinks is going on here.

I came across the body of Apprentice Gwerina. She apparently died while bringing a sacred relic to a shrine in Markarth.

According to the note I found, Apprentice Gwerina was trying to bring a sacred relic to High Shaman Glynroch in Markath. I should pick up the relic so I can deliver it there.

I found the body of Kitza-Enoo. It looks like he died after stealing a sacred relic from the Reach.

According to the note I found, Kitza-Enoo stole a relic sacred to the Reachmen from Apprentice Egvarn before he could deliver it to High Shaman Glynroch in Markarth. I should search his pack for the relic.

I came across the body of Ansdurran. He apparently died after stealing a sacred relic of Hircine bound for a shrine in Markarth.

I retrieved the sacred relic. I should take it to the shrine in Markarth and let High Shaman Glynroch know what happened to his apprentice.

High Shaman Glynroch sent Apprentice Orla to find the Symbol of Uricanbeg, the final sacred relic needed to dedicate the shrine, at Lost Valley Redoubt. She hasn't returned yet, so he asked me to go aid her.

I need to go to Lost Valley Redoubt and find Apprentice Orla and the remaining symbol of Hircine.

Lost in The Reach

Hiretta asked me to look for her husband, Bolfalgar, and their pet bunny Snowy. She thinks they might be lost in the Reach.

Hiretta gave me a whistle and told me to use it to summon Snowy. She said if I find Snowy, I might find Bolfalgar, too.

A strange and powerful storm disrupted the protective wards around the village of Karthwasten, turning a portion of its people feral. Apprentice Fialyn needs help restoring the wards.

I arrived in the village of Karthwasten. I should speak with Apprentice Fialyn.

Bralthahawn's needs someone to gather a strange kind of mushroom growing in Gloomreach that a few Reach clans are interested in. I volunteered my services.

I must enter Gloomreach and gather the mushrooms.

An outsider scholar reported the presence of an unknown Dwarven construct in a nearby cave that's producing new mechanical spiders. The Ard's Stonehands asked me to destroy it and test a Dwarven rod that supposedly renders constructs docile.

I need to find the cave where the Dwarven construct is and destroy it. I should also use the Dwarven rod on any Dwarven spiders I see to render them docile.

Nelldena charged me with finding allies to assault the harrowstorm ritual sites springing up across the Reach.

Wayshrines - if visited allow you to teleport to this location. Fast Travel between wayshrines is free, although fast traveling to a wayshrine from anywhere will cost gold.

Locales - Area of Interest, visit every locale on map for achievement.

Group Locales - Group Area of Interest, areas designed to explore in a group with other players.

Skyshards (ground level) - Skyshard on the ground level or above. Every three skyshards a player collects will yield one skill point.

Skyshards (inside dungeon) - Skyshard in dungeon. Every three skyshards a player collects will yield one skill point.

World Bosses - powerful elite encounter(s), to defeat him you will need the help of other players.

Mundus Stones - visiting will grant you a permanent blessing, but only one blessing at a time.

Ancestral Tomb - for The Ancestral Tombs Quest visit them all to reveal location of lost Library of Andule (Morrowind).

Strider Caravaner Tower - Use them for quick travel for free in Vvardenfell (Morrowind).