Origin is a small settlement in Central Abessa to which you can join and make it your homebase. You can get your own House here. It is easiest to go to Origin on the south side, from the east you will meet a mob of monsters to the [Mutant Siege] quest. Inside city you are safe.

01 This is the first time you meet Jonesy

After the first conversation he will walk around the town.

The Scout Jonesy has been tasked with securing the area around Origin. He can't do this alone.

You have to finish [Mutant Siege]

03 Camp in the Center Teleport

Talk to him for [Origin - The Power of the Center]

A Foot in the Door

Origin is a well situated camp and offers skills and resources that will prove useful. If I want to make this my base of operations then I will have to prove myself to the people here. It's not worth going back to Lloyd until I've proved his people can trust me.

You can duel with him, this is not mandatory and is not the best idea.

Measuring Strength with the Camp Master

The camp master, Eckard, wants to throw me out of Origin. must change his mind.

Defense of the Camp

Origin needs strong and reliable fighters to help defend it. will have to station at least three well-trained and loyal companions at the camp. They must be people I can trust. Succeeding in this will improve Eckard's mood and show them that I want to help.

The mechanic Harley wants to get my crashed raider back to Origin so it can be repaired. He needs a high capacity hydraulic conductor in order to get the engines going. A functioning raider could prove to be extremely useful.

7300 series fighting colossi are equipped with a high capacity hydraulic conductor. The only Way to get it is to defeat the fighting colossus first. Harley says that he saw a Series 7300 mech in the southern mountains in Ignadon.

Return to Lloyd for [A Foot in the Door]

Lloyd will give you Tower Key

I should take a look at the living quarters in the tower at the Origin camp.

You need Tower Key from Lloyd.

Visit it for [Promising Living Arrangements]

Your Chest - you can store items here.

Board on the wall - Here you can place Map Pieces, this is puzzle.

Gains subsidies for community expansion. You can buy from her:

Once you have your House, you will be able to change its appearance by buying: 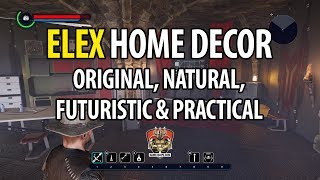 Trader if you buy it from Annie

Cleric Workbench if you buy it from Annie

Berserker Workbench if you buy it from Annie

Outlaw Workbench if you buy it from Annie

Map Piece 05 - in the basement

To finish [Defense of the Camp] report to Eckhard your Companions. Ray, Arx and Caya should be OK.

After finishing [Salvage Work] for Harley he will bring your Rider to Origin, and will try to fix it.