Here you will find the walkthrough, maps and game guide for The Outer Worlds video game. The descriptions of locations in the game include maps, a list of Quests, interactive NPCs and secrets.

The Outer Worlds is a single-player RPG created by Obsidian Entertainment, released on PC, PlayStation 4 and Xbox One on October 25, 2019.

The content of this page is not yet finished. It will be updated and expanded.

The Outer Worlds Walkthrough with Maps

The beginning of the story ...

In the distant future, terrestrial corporations joined their forces to colonize the Halcyon System, located on the border of a known space. Two colonization ships were sent, Groundbreaker and Hope.

The Groundbreaker ship arrived and the colonization of the gas moon giant Terra 1, now known as Monarch, began. Terraforamation failed because it resulted in a mutation of flora and fauna on Terra 1 threatening the colonists. Corporations have moved to the next planet of Halcyon, Terra 2.

The second ship, Hope broke down and his arrival was delayed by several decades. His wreck, drifting in the Halcyon system, found years later, was intended for losses and the colonists in hibernation were considered impossible to save.

This is where the game's story begins. Out of the right scientist Phineas Vernon Welles finds the ship Hope and rescues one passenger. You are this passenger and you are known as Stranger.

You are no longer the same man who embarked on a Hope ship years ago. Prolonged hibernation has caused you the ability to slow down time known as Tactical Time Dilation.

Now it's time to help Welles realize his secret plan to free the colonists from the power of the corporation, or maybe something more awaits ...

Botanical Camp (Deserters) or Edgewater (Spacer's Choice) who will get Power Comes Now The Power Walkthrough.

Character Creation in The Outer Worlds

In The Outer Worlds there are six character attributes describing your protagonist, they are Strength, Dexterity, Intelligence, Perception, Charm and Temperament, each of the attributes affects six character skills. There are three types of attributes: Body, Mind and Personality, more about Character Attributes.

There are 18 Character Skills The Outer Worlds, each Skill got two base Attributes and each point in Attribute significantly increases corresponding Skill, up to 50 points. After you reach 50, you can specialize by adding points directly to Skill, more about Character Skills.

There are 42 Character Perks in The Outer Worlds, they are divided into 3 Tiers, you get a new perk every even level, unlock a new tier with every five unlocked perks, more about Character Perks.

Flaws are permanen negative "perks" that our character can get during the gameplay, for example if you perform poorly against certain types of opponents, your character may develop a phobia against them. Picking the flaw is optional (at easy difficulty levels), but it does reward the player with an extra perk point, more about Character Flaws.

In The Outer Worlds character creation you can choose Career Aptitude for your character. This parameter describes his origin, history and gives an additional small bonus to the parameters more about Career Aptitude. 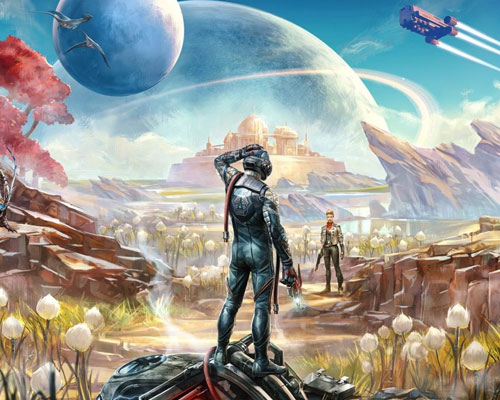 Welcome To The Future - Try Not To Break It. Lost in transit while on a colonist ship bound for the furthest edge of the galaxy, you awake decades later than you expected only to find yourself in the midst of a deep conspiracy threatening to destroy the Halcyon colony. As you explore the furthest reaches of space and encounter a host of factions all vying for power, who you decide to become will determine the fate of everyone in Halcyon. In the corporate equation for the colony, you are the unplanned variable.

Difficulty Levels in The Outer Worlds

There are 4 difficulty levels in The Outer Worlds: Story, Normal, Hard, Supernova.

You can change the difficulty mid-game as you like between Story, Normal and Hard.

Supernova level can only be selected at the start of the game, if you lower it mid-game you cant set it again.

Story difficulty setting - enemies have less health and do less damage, the game is easier than normal, this setting gives you a pleasant gameplay where the main element is storyline.

Normal difficulty setting - this is the standard difficulty of the game provided by the developers.

Hard difficulty setting - enemies have more health and do more damage, this difficulty is for advanced players.

Supernova difficulty setting is designed for players who want a really difficult and realistic gameplay. In addition to the fact that the opponents are definitely stronger, some gameplay rules are also changing:

Factions, Corporations and Groups in The Outer Worlds

Your in-game deeds affect your reputation, positive or negative, that your character earns from the organizations in The Outer Worlds more about Factions

Fast Travel is a convenient way of moving to areas that you've already explored.

Picking up items that belong to other people is a crime and affects reputations, so be careful what you grab in-town!

Spending points in a skill group raises every skill in that group to a maximum of 50. To go above 50, you must spend points directly on the skill.

A downed companion will pop back up at the end of combat, but not in Supernova difficulty!

Perks provide unique bonuses for you and your companions.

If you give your companions a focus fire target, they will keep attacking that target until it's down, they're down, or you give them a new order.

You can flag items in your inventory as "Junk", then sell them all with a single command the next time you're at a vendor.

Pristine items are more than shiny! They have more durability and are worth more to vendors.

You can get temporary bonuses to your skills from consumables and wearing armor. This helps you pass skill checks and improves skills' passive bonuses but doesn't unlock skill upgrades.

Charge-up weapons like the Plasma Rifle will consume more ammo with a longer charge, but also inflict a lot more damage!

Melee weapons can have their grips and attack points modified to upgrade the weapon. Damage types, swing speed and more improvements are available.

Science weapons have weird and useful effects, but they also do damage - that damage increases as your Science skill improves.

Plasma weapons use high-energy fields to draw in and convert ambient aether into a superheated plasma state, which can be used offensively.

Bad guys too close to shoot? Use a Quick Melee attack to knock them back and give yourself room to shoot.

Carrying too many things? You can transfer items into containers that are on your ship or that you find elsewhere in the world.

Crouching is useful! It activates stealth, improves your accuracy, and makes you a smaller target. It does make it harder to watch tossball matches, however.

Each of your companions has unique perks and a unique special attack. Build a team that fits your play style - or just hang out with your favorites.

Every 20 points in a skill unlocks a new bonus or upgrade in that skill - skill descriptions on your character give the details!

Raising your Block skill unlocks perfect block. With pinpoint timing, your block can stagger the enemy attacking you!

Raising your Engineering skill will allow you to repair your armor and weapons without a workbench, and reduces the number of parts needed!

Raising your Medical skill unlocks consumable slots for your Emergency Medicinal Inhaler, and increases the duration of inhaled consumables.

Raising your Science skill allows you to tinker your armor and weapons at a workbench, increasing the amount of damage that they prevent or cause!

Raising your Melee weapon skills unlocks the ability to do power and sweep attacks.

When your Holographic Shroud disguise starts failing, enemies may approach and interrogate you - you'll then have an opportunity to talk your way out of the problem.

When your Inhaler finishes off a stack of consumables, it will automatically reload itself with another stack of the same type, if available.

While affected by a status effect, you will see an icon in the upper left of your HUD. You can read details about the effect on your character panel.

While sneaking, indicators in your HUD show nearby enemies, and their footsteps become more noticeable.

You can be both admired and feared by the same faction. They are not mutually exclusive!