Kadara was of great interest to the Andromeda Initiative after it appeared on long-range Surveys. Seemingly abundant liquid water and an oxygen-mix atmosphere made it a strong candidate for settlement, earning it the designation Habitat 4. Closer range surveys now reveal that Kadara's water sources are tainted and unpotable.

Of greater concern is the large settlement known as Kadara Port Reportedly once a trade port for the angara, it has been adopted by exiles, pirates, and mercenaries who use it as a staging ground. Kadara Port is considered a rogue state by the Nexus, given its strong ties to the Exiles, and Initiative personnel are advised to keep their distance.

Saneris and Drexel have both asked you to scan murder victims in the badlands. One wants justice, the other wants profit. Search for bodies in the cesspools, scan them, and decide who you'll give the information to.

You found a datapad revaling that the Collective is holding a member of the Outcast for ransom.

Scan Kadara B x 3 (they are probably arranged randomly). It finish at Kadara 33

Kadara needs clean drinking water-streams and lakes are toxic and filled with sulfuric acid. Remnant technology could transform Kadara's water supply, but the monoliths around the planet must be activated to begin this process.

The Outlaw Monolith is a part of Healing Kadara's Heart task. 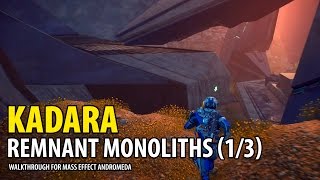 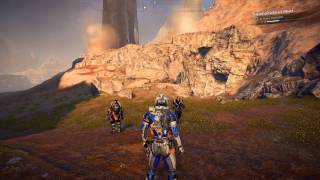 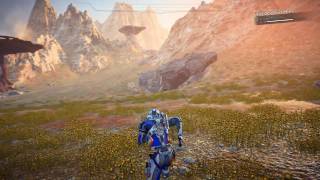 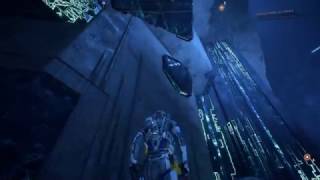 Before an outpost can be established on Kadara, you must Solve Kadara's water toxicity problems and quell the escalating rivalry between the Outcasts and Collective.

It is for Safe Journeys, kill them and search containers.

Dr. Farenth tell her you don't belive her and not buying it.

Container is at the top of instalation. Next two containers are at bottom level.

There is a connection in the tasks between this location Refugee Camp (13) and Herbal Entrepreneurs (29).

Incorrect sequence of tasks blocks (probably due to a bug in the game) getting another task.

An asari on Kadara hasn't spoken to her mother since she was exiled from the Nexus. There's a possibility the signal from her communications equipment could reach the Nexus, but it's broken. You need to look into repairing the equipment for her.

Climb the tower, scan and fix.

You came across some people living in a hut; they are acting strangely and babbling nonsensically. Investigate the cause of their odd behavior.

Scientists talk to them

For Out of the Frying Pan

For A Peaople Divided. You have to scan a lot of items, also small. Traces lead outside, to the blade.

For Hunting the Archon

It is for Nakmor Drack: Krogan Betrayal. Defeat the exiles. Search the hideout for clues.

Surveyor's corpse for The Baryte Rush, above the corpse you will find datapad.

Behind closed doors. You will meet Lynx.

You've learned that the Collective build a hideout deep within one of the cave networks in Draullir.

Just go to Crux and talk to her.

There are some scans inside base. Also you will find containers.

One of the Charlatan's representatives has been tweaking orders for their own gain. You have offered to discreetly investigate the Collective base to help uncover the imposter.

Crux has provided you with two clues to help identify the imposter their footprint is humanoid in shape and they should have high levels of residual sulfur on their clothes.

Mysterious Button at the foundations of the building. Each press will give you another message until the text ends.

Some containers around the base.

Prison Prison is at the very bottom of main building. To open it use Terminal in Crux room

For Behind Enemy Lines

For Behind Enemy Lines

For A people Divided, enter building, defeat the Roekaar. Explore cave for containers before you exit.

Something In The Water

While exploring Kadara, you found a settlement littered with dead angara.

Scan around, listen to audio log and go to Kadara 20 to finish it.

An urgent S.O.S. signal from someone in serious trouble was received.

SOS source is at Kadara 29

For Emergency S.O.S., just talk to them.

Gone With the Wind

Scavengers are stealing turbine parts from the wind farm outside Kadara Port. An exile named Aislin has enlisted your help to bring the parts back.

A turian named Thrasia sold you the navpoint for a weapons cache stolen from the Nexus.

After return from A Packaged Deal Thrasia will become merchant

Kett Shuttle Model you can buy it from Thrasia

Examine Debris for Gone With the Wind

Weapons Cache for A Packaged Deal, defeat the exiles, examine.

Location for Task: Kadara's Ransom after you scan 3 datapads.

You discovered a weapon cache on kadara. Continue to scan caches to determine their destinations

Shoot explosives at ladning zone to prevent the shuttle from leaving Kadara and defeat the outlaws.

38 Salarian near terrarium inside building.

It is possible after finishing Emergency S.O.S. Task at (29).

You've found a UV light that could help the herbal entrepreneurs grow their plants.

When you give them UV Light

Return to Kadara 13 and talk to Refuge Doctor.

After visiting back Kadara Slums

Now you can finish Settling Kadara, to do this you have to return to the Tempest.

From Tempest return to Kadara Port and do Night on the Town, then wait to get High Noon

Save Sloane to choose Outcasts. Then go to Kadara Port 04

In both cases you will be able to build Outpost on Kadara.

See below both solutions. 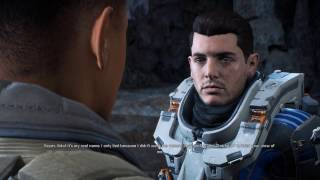 A group of settlers have created a cult to worship a massive machine they call Old Skinner. Their leader, Bishop, left to pay tribute in Kurinth's Valley but has not returned.

Kadara's Architect after you got Old Skinner

Now you should have easily:

Defeat the outlaws for Peebee: Remnant Scanner and search site for rem-tech piece.

For Life on the Frontier

Defeat the Three Sabers and search the hideout.

Location for Contagion, defeat the Roekaar, and enter building.

Start from lower floor, use console.

There is no need to kill her. Let the Roeaaker leader go.

A Corpses to scan for Counting Bodies

B Datapads for Task: Kadara's Ransom

D Scan kett tracks for Behind Enemy Lines (after visiting 23)