Eos, designated Habitat 1, was the earliest "golden world" identified for Outpost placement. Named for the Greek goddess of dawn by Jien Garson personally, Eos embodied the hope of the Andromeda Initiative for a new start.

On arrival, the Nexus discovered that a world projected to be arid but comfortably habitable was now ravaged by radioactive fallout from the Scourge. The planet's atmosphere is wracked by storms that have spread the radiation across continents, periodic strong winds strip equipment and damage shuttles.

Reports from the Nexus include a sanitized account of two attempts to Colonize the planet, both of which ended in failure and an unacceptable loss of life.

You will not be able to explore the entire Eos planet at the beginning of the game due to radiation. Go until you build the Prodromos Outpost and continue with the storyline. Return to Eos later in the game when radiation is no longer a problem. It will be after Havarl and Voeld.

Here you land on planet Eos. The buildings you see are your abandoned base of Initiative.

Check the Eos Site 1 Promise map to see this location.

First you should focus on completing the task A Better Beginning.

... Continuation of the task from Eos Site 1 Promise

This one is easy one. 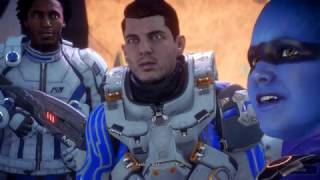 After fight, scan all around.

Two glyphs and little sudoku (I hate it :)) 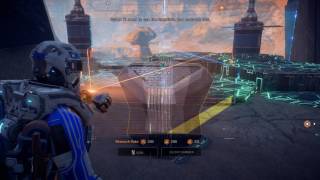 After fight, scan all around.

Scan all machines outside. There are some containers around

Under the base there are 2 more containers. 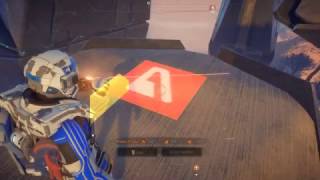 ... continuation of the quest

Remnant Vault is nice visually but linearly built labyrinth. You just have to go down the very bottom by clicking on Consoles and killing your opponents.

Look around the alleys behind the crates.

You need to scan everything. With Scan enabled you will see a yellow conduit. You have to follow it all the time down into the vault.

The goal is to restart the installation.

When "everything starts to go down" and you have to run to the exit, [Optional] Retrive the unsealed items will appear.

The only thing that is more difficult to find is the secret location. It is on the side of the main task line. In the main hall on the second level, this one with trees, there is one tree a bit in the distance. To get to it you have to turn on an extra console and go back a bit. See the video below 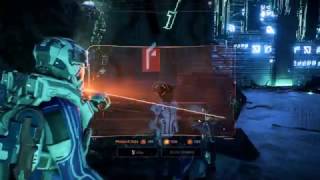 When you come back to the surface, the this part of the task will be solved.

You can build Science Outpost or Military Outpost

Science Outpost - will give you minor visual difference at the end of the game.

You can now return to Nexus or further explore Eos

Check the Map of Eos Prodromos Outpost to see this location.

After construction of Prodromos

This is location for The Secret Project Task

Site 2 engineers knew they were in desperate circumstances. When the kett became aware of their attempts to settle. Engineers tried to research technology that Could help them fight the kett.

Components are in Eos East B1, B2 and B3

Chief Engineer Grace Lito Was One of the last people off Eos after watching both Promise and Resilience slowly fail. She went back into Cryo on the Nexus. She might be willing to redeploy. Once your outpost is placed.

It's all for Eos for this moment. Go on with the story and come back later in the game when the radiation decreases.

Task: What He Would Have Wanted

You found a Survey job started by Initiative technician Eric Camber. He was apparently interrupted by kett, and may have died. Accurate surveys are simple, but critical. Completing his beacon run is a small thing, but will help make Eos more viable.

This site is for Task: The Ghost of Promise. If you found Datapads from Ana Carrell around Eos, task will show you this location.

If you have not found any around Eos, do not worry, Datapads will be inside Remnant Site

There is also Hidden Cache X6 inside.

Task: The Ghost of Promise

You've discovered a research station left behind by one of Eos first settlers. SAM theorizes that there may be more at Other Remnant sites.

Pickup 3 Datapads inside Remnant site and deliver them to Prodromos. 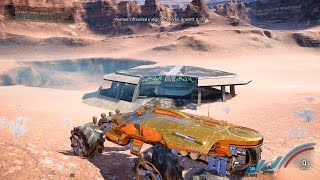 This task has random starting location. The marker above the device is a skull and two bombs

You've discovered a surveillance device in a kett camp that monitors the activity of Prodromos colonists. Prodromos won't be safe unless these devices are destroyed.

Surveillance devices are random, look at Eos West and Eos East M, then SAM will tell you when to go to Eos West 14

They are not always in this spot. Ketts group, kill them, scan and examine.

The task starts when you find the first (random locations) Kett device in one of their camps.

The kett have been keeping Remnant data cores for testing in their camps. SAM suggests they may be extracting important information from the cores.

After Hunting the Archon Primary Ops

For Cora Harper: A Foundation

For Dissension in the Ranks locate the source of the signal.

This is first relay, go to second relay Eos West 19

A2 Dead Body to scan for Task: Naming The Dead

A3 Dead Body to scan for Task: Naming The Dead

A4 Inside Kett Base. Dead Body to scan for Task: Naming The Dead

A5 Dead Body to scan for Task: Naming The Dead

A6 Dead Body to scan for Task: Naming The Dead

A7 On the stairs, on side lake, near 2 story building. Dead Body to scan for Task: Naming The Dead

B1 Inside Kett Base. Component for The Secret Project

B2 Inside building. Component for The Secret Project

B3 Component for The Secret Project

G1 Scan shuttle burn mark on the ground for Doesn't Add Up.

G2 Scan shuttle burn mark on the ground for Doesn't Add Up.

G3 Scan shuttle burn mark on the ground for Doesn't Add Up.

G4 This location has a high level of radiation and you will be able to get to it after returning from Havarl Planet. Scan shuttle burn mark on the ground for Doesn't Add Up.

L Place Beakons for Task: What He Would Have Wanted