Elaaden is the scorching desert moon of a gas giant Identified on Initiative charts as Habitat 2. Eaaden Was considered a "golden world" despite its harsh conditions, because of the moon's vast mineral wealth. Tidal gravitational effects cause plumes of Sodium silicate to erupt from Elaaden's Core, depositing unusually pure Silicon Sand across the Surface-invaluable for manufacturing high-performance computer hardware.

Orbital Surveys show that contrary to projections, Elaaden is almost devoid of water vapor, making long term settlement or mining efforts unlikely. Those who live on Elaaden face a constant struggle for survival. Able to thrive in environments that would kill most organic species in days, the krogan who departed the Nexus have established a Colony on Elaaden.

You arrived at Elaaden to do Priority Ops Elaaden: A New World.

This is the last big planet on which you will put Outpost. You should have here the following tasks to do or to finish: The Little things That Matter, Ryder Family Secrets, Turian Ark: Lost But Not Forgotten, Liam Kosta: Outpost Worlds, Nakmor Drack: A Future for Our People, Forgotten History, Contagion, Task: An Exile Raid, Task: Hitting Rock For Science, Task: Remnant Data Cores.

Take Drack with you on your trip to Elaaden.

Elaaden has a very high temperature. To avoid burns you have to hide in any shade.

End of Elaaden: A New World

Elaaden is an arid, burning desert, but Remnant technology could make conditions more livable for Milky Way species and the angara. The key to doing so is the Vault, which can be unearthed by activating the Remnant monoliths Scattered about the planet.

Conflict In The Colony

For Conflict In The Colony, speak to him.

Parlay With The Krogan

Strux insists that Morda is planning a move against the Nexus. We need to visit the Krogan colony and check it out ourselves. We should look for Ravenor Brenk.

Morda will interrupt the conversation.

The Mind Of An Exile

Lexi suspects the scavengers on Elaaden may have more problems than meets the eye. Scan scavengers in the Paradise and surrounding area so she can provide an analysis.

Kent Halsey traveled from the Nexus to locate his exile sister, Isabel, but he needs help. He thinks Velonia in the Paradise might have information to help find her.

Speak to Velonia in Paradise. Isabel is in cave at Elaaden 18

For The Rebel ask about Isabel Halsey.

Annea Vendor - she will tell you lot about Elaaden.

It is some time after you finish The Mind Of An Exile.

Lexi has developed a serum that may hold off the symptoms of neural decay that a number of scavengers are experiencing. All she needs is the perfect test subject.

Pick up Lexi's serum inside Vendor store for Gray Matter

by Autoola
"Quest Truth and Trespass is missing. Two locations in the north near white structure. There's a quest missing. It has to call something like "Augmentations Crafting" (I don't play in english, so I'm not sure). A krogan standing near the Paradise will give it to you, if you talk to him (or her?)."

An exile named Barrett harbors aspirations of turning Elaaden into something more than the lawless wasteland it is now. To do that, he needs a hideout that is well fortified, and has his sights set on a rival gang's Outpost.

Gang's Outpost is in Elaaden 15

SAM has identified more sites where scavengers could find Remnant cores. Making the cores inert will prevent them from becoming dangerously unstable.

Make the Remnant cores Elaaden B

Nora Tallis is stranded on Elaaden until her shuttle is repaired. Retrieve her shuttle's thruster from the scavengers she sold it to. 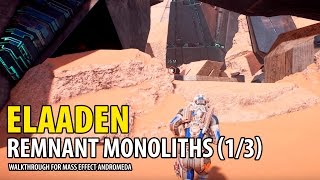 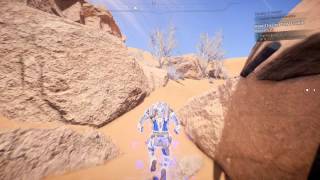 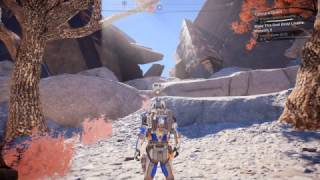 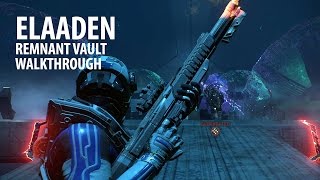 Several issues must be addressed before we can establish an Outpost on Elaaden. One of the most pressing is to ensure that the krogan there do not see our activity as a threat. Being supportive of them might gain their trust.

This is main quest on Elaaden.

There is no in game map for this location.

The main purpose of this location is to gather Remnant Data Core for task and solve Remnant Puzzle for Cryptographer Trophy. 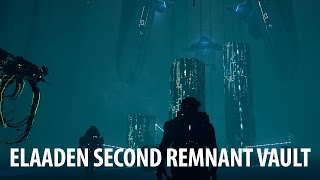 This is random quest starting location, should be in small Remnant Site

You've discovered a Remnant data cache the scavengers have tampered with (random locations). SAM can piece togheter its data if you locate additional caches.

You will recognize data caches by magnifying glass icon above it. Look at Elaaden D (random locations)

Clear out the scavengers, defeat the reinforcements and contact Barrett using terminal.

SAM has discovered tracking device inside an explosive cannister. The scavengers on Elaaden may be up to something.

Look them at camps Elaaden E, skull and bullets are above it.

Explosive stockpile to destroy is at Elaaden 40

Datapad for The Rebel

You've discovered a datapad that recounted a scavenger's run-in with a gang run by "Little Mouse." Find more datapads to learn more about this gang and its activities.

For Turian Ark: Lost But Not Forgotten, scan pods.

You wandered off the beaten path and something in the middle of nowhere Seems to have disabled the Nomad. A scavenger named Hardy, who just happened to be around, claims he can fix it.

For Out of Gas

Kill Hardy or pay him. Take part from crate and return to Nomad.

You've discovered the body of a scavenger who was killed by a highly infectious disease. SAM recommends finding the source to prevent the disease from spreading

For The Search for Ljeta speak to Velonia

For Rising Tensions, place the lure and defeat the fiend

For Save Dr. Okeer's Krogan Research, hack the terminal.

The Flophouse is just a large scavengeres base. Everyone here will be enemy to you. Kill them all by following the task that brought you here The Flophouse.

Enter from the East.

In a two storey building on the south side, on the top floor:

Terminal to turn off the alarm

A recent transmission between two scavengeres discusses a recent ship crash. There might be survivors.

crashed ship is at Elaaden 30

Next to the south, on guard tower:

Annea knows about a water source on Elaaden. Rather than share its location, she sells water to the planet's inhabitants, who then live and die by her whim. Looking into this situation would probably benefit all involved, as well as Elaaden's future residents.

Water source is in Elaaden 31 but you have to search Annea's Office first.

Head to northern part to enter the command center.

Look for console to disable alarm.

Encrypted Message with password, up on north side, inside building

Clear out the command center

Until then you should earn:

Locate the crashed ship for Crisis Response, defend suvivors and talk to them.

Return to The Paradise for Water Supply and find Annea's Office. It is on top floor.

Near closed doors, scan for wires. Follow wires to console. Console is near containers. Hack console to open office doors.

You can let Annea continue to trade water and you will get a bribe in a chest in her office. Or better stop her. She will attack you, but when you defeat her a new vendor will be sent by Nexus to distribute the water justly.

For Task: Cache Flow after you locate enough caches.

In first room fight scavengers, and pick some containers.

Next, in the place where the corridor turns you will find Container with Remnant Puzzle

Next you will find Hydra and Destroyer fighting with each other

In last room you have to scan Remnant data cache for Task: Cache Flow.

Drive into the tunnel. Watch out for enemies and turrets

Go all the way straight as the corridor leads.

There is Remnant Puzzle Console here.

You have to scan one more glyph, it is on column hear. Scan console and follow yellow path.

There is no Drive Core on this ship. Now you have to find second exit (34).

After you exit ship, Forward Stations will spawn near.

SAM scanned the drive core housing and was able to discern unique signature. Suvi will use global planet scans to help us pinpoint the location of the stolen drive core so that we can get it back.

For Search for the Stolen Remnant Drive Core, scan it

For Search for the Stolen Remnant Drive Core, scan it

37Cave south of The Flophouse

For Search for the Stolen Remnant Drive Core, enter cave

Return to New Tuchanka and finish all other tasks

You can continue The Little Things That Matter

A report has come in from New Tuchanka about a giant Remnant construct that has appeared and is working a path towards the Outpost.

Speak to her about Architect on Elaaden

For Task: Volatile after you have Destroyed enough volatile canisters

For Task: Little Mouse after you have located enough datapads

For Dissension in the Ranks investigate it

Return to Tempest and talk about it with Suvi and Lexi

Random locations can be checked more than once, log out and log in to game and check location again for random quest items.

A Scan minerals for Task Hitting Rocks For Science.

B Make the Remnant cores inert for Dismantled