Tips & Tricks for Rage 2 Game Guide, How to Fast Travel in Rage 2, How to Spawn Vehicles in Rage 2, Easy Locations of Storage Containers, Datapads and Ark Chests, How to fly in Rage 2, where are BFG 9000 Weapon and Settler Pistol.

Vineland Vineland, your home. The last Arkist Enclave to survive the Abadon Mutie Uprising. A utopia of peace, science and enlightenment - at least that's what the Elders would say. Others might call it insular, elitist and xenophobic.

Lagooney Town Lagooney is part of the core of the Trade Coalition. It's the smallest and youngest but perhaps the most important since it supplies the others with food and swill. The town is also infamous for it's lax enforcement of law and order.

Wellspring Town The greatest of the Trade Coalition towns, Wellspring is the beating heart of commerce and trade. Ruled by the wealthy Trade Barons and the elected Mayor, it casts a long shadow of influence over the Wasteland.

Dreadwood Town Dreadwood is a small, newly established Trading post in the heart of the Wilds. Mostly occupied with Prospectors and Scavengers who ply a dirty and dangerous trade looking for old world tech beneath the fertile soil.

Gunbarrel Town Gunbarrel has been around for a long time but has taken it's share of knocks and bruises over the years. A dedicated trade town, it services the southern Wasteland and is an active member of the Trade Coalition.

Oasis Town Oasis takes its name from the large casino that was destroyed in the Authority Wars. The new Oasis is a small Trading post that serves as a tenuous no-fire zone between the Immortal Shrouded and the Trade Coalition.

Capture and Control for Loosum Hagar in Wellspring Town.

Authority Sentry Authority Sentries are powerful point-defense turrets, equipped with advanced Al, targeting systems and internal reactors. Only the Authority has the know-how to make use of them.

Convoy Convoys roam the Wasteland causing massive mayhem. Destroy the Convoy by taking out the Weakspots on the convoy leader. Destroying Convoys will earn you Autoparts you can use to Upgrade your vehicles.

Pit Stop Bandits and gangs roam the Wasteland in vehicles to maintain dominance and to strike out at rivals. These vehicles need fuel and the Depots are important staging points to target for anyone wanting to combat the roaming threats.

Repowering Station To harness smaller amounts of power to fuel their convoys, the ingenious Immortal Shrouded use solar powered recharge stations spread out along the road networks. These sites are manned by warriors at all times.

Road Choker Road Chokers are an effective way for bandits to leach on trade and control territory. Choking a road is like blocking an artery in the body of the Trade Coalition. The flow of goods and people are what keeps civilization alive after all.

Kill And Destroy for John Marshall in Gunbarrel Town.

Bandit Den Any hangout for a gang of raiders is known as a Bandit Den. Usually nothing more than a few shacks taken by force, they offer minimal shelter and protection but can serve as a staging ground for further attacks.

Crusher Nest Abadon Crushers are giant, legendary creatures of destruction in the Wasteland, each more than a match for even a full squad of Rangers. Smaller mutants worship them and everyone else tries to stay as far away as possible.

Mutie Nest Abadon Muties nest underground. Regularly, the population becomes too large and threaten to spill into the surrounding area. Keeping the population down is seen as important for the Trade Coalition and is the source of frequent Merc contracts.

Search and Recover for Dr. Kvasir in his Laboratory in northern Sekreto Wetlands.

Feltrite Meteorite Glowing rocks of feltrite infused rock are still falling from orbit, long after the impact. Competition for these are fierce as feltrite is the most precious resource there is.

Ark The Arks were cryogenic survival shelters for the elite and their equipment. The people are gone, but some still house experimental Nanotrite Powers and powerful Ark Tek Weapons.

Ranger Echo Reclaiming the remains of fallen or lost Rangers is an important duty of the living Rangers. Only by salvaging the unique gear and nanotrite imprints can new rangers be inducted and the Rangers continue to exist.

Exploration Location This location promises an opportunity to scavenge loot and resources. There may or may not be competing enemies here already with the same idea. Better in the Rangers hands than vicious bandits.

A labyrinth of jungle life that has been torn apart by a crazed goldrush centred around untouched old-world technology. Miners and wasteland hopefuls operate unchallenged in a vibrant miasma of opportunity.

The Torn Plains represents both the geographic and economic hub of the Wasteland; playing home to the bustling metropolis of Wellspring, the teeming trade capital, and the infamous Chazcar derby, where those with a penchant for vehicular manslaughter can quench their thirst.

The Broken Tract is named after Leako Burnwhizz, an explorer credited with the re-discovery of the Wasteland. Long periods of travelling and less-than-sanitary living conditions granted him not only name and fame, but also excruciating pain upon urination.

A sprawling maze of gulches containing Vineland, the militaristic bastion of the Rangers and Wall Rats, and Walker's home. Historically the vistas and bluffs of the surrounding countryside would have drawn countless punters to the area, however those times are long gone.

An ocean of sand, ruled by the iron fist of the Immortal Shrouded. Patrons of the Golden God operate large-scale excavation operations in order to unearth valuable buried technology from an empire long washed away.

Home of the faction referred to as River Hogs, this place is stuffed with swamplands and no matter is left of the constructions of the Old World.

Settlers of the Wasteland

They'll deal with you kindly is dependent upon what number of favors you find yourself doing for them. They won't attack you on-sight, but most of them are just in it for themselves.

Exist in almost complete anarchy, with only the roughest of hierarchical structures holding them together.

Goon Squad is largest, craziest and most prevalent faction in the wasteland. They uses massive convoys, mobile fortresses, to transport goods and to patrol any territory. Unknown provider is offering them with extra highly effective weapons that improve the havoc

Highly technologically savvy faction, the Immortal Shrouded have made use of advanced gadgets and weaponry from before the coming of Apophis.

Masters of the swamps and massive junkyard mechs, Hedonists.

You might catch them patrolling in their airboats and monster trucks, using smaller crews to transport goods in order to mitigate risk of losing a large haul. Heavily armored exosuit with numerous dangerous armaments, like flamethrowers, rocket launchers and heavy machine guns

Most primitive of the factions, relying on their natural instincts

The Mutants try to mimic human behaviors, usually incorrectly. They're typically seen carrying human tech and equipment, though their understanding of these items is minimal. Simplistic religion that mandates sacrificing humans to a god.

Many thought they were gone for good, when in reality they retreated underground, gathering their strength, advancing their technology, and waiting for the right time to return. Command by leader Martin Cross, armed with incredibly advanced weaponry and cybernetic enhancements, they appear without warning and strike without mercy. 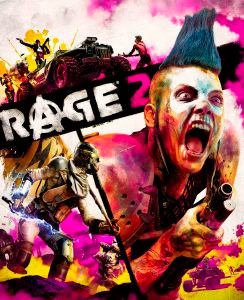 First-person shooter – where you can go anywhere, shoot anything, and explode everything. An asteroid has annihilated 80% of the earth’s population, and humanity’s numbers are dwindling. Ruthless and bloodthirsty gangs roam the open roads and the tyrannical Authority seek to rule with an iron fist. As Walker, the last Ranger of the wasteland and a threat to their power, you have been robbed of your home and left for dead.