Borderlands 3 Map of the Galaxy

There are four playable characters in Borderlands 3: Amara, FL4K, Moze and Zane, each representing a unique fighting style and each having three skill trees.

Amara is a renowned champion of the people and bonafide badass.

FL4K is a wandering robot who always brings one of their three loyal pets into battle to buff stats and attack enemies.

Moze is a battle-hardened former Vladof army soldier who specializes in mechanized combat, she got bipedal tank, Iron Bear

Born into Pandora's notorious Flynt family, Zane is a semi-retired corporate hitman who always has a gadget up his sleeve.

A barely-habitable rock that the Children of the Vault have made their homeworld. Pandora's searing-hot deserts, vicious wildlife, and burgeoning bandit population have proved too much for all who have tried to tame the planet and exploit its resources. The ruins of Dahl, Atlas, and Hyperion facilities litter the landscape, inhabited by all manner of Skags, Rakk, Varkids, and Spiderants that are intent on eating and killing you. Usually in that order.

Home to the Atlas Corporation headquarters, Promethea is a metropolitan world covered in futuristic towers of chrome and glass. A recent siege by Maliwan has turned the urban environment into a warzone; their mechanized infantry patrol the streets, rodent / insect hybrids known as Ratches infest the sewers and back-alleys, and the Children of the Vault are seizing the opportunity to recruit displaced and disgruntled citizens. Atlas CEO Rhys Strongfork is getting desperate.

A backwater swampland of a planet, and family home of the Jakobs Clan. Eden-6 is covered by lush greenery and stagnant waters, dotted with occasional settlements and the rusted hulks of crashed spaceships. Civilization has never fully taken hold here, and indigenous dangers including ravenous Saurians and semi-sentient Jabbers effectively rule the planet. As if you didn't already have enough to worry about, the Children of the Vault have a presence here as well.

A misty, tranquil planet that has recently attracted the wrong kind of attention. Athenas is mostly uninhabited, save for a sect of monks known as the Order of the Impending Storm who have made their home in the high peaks of the mountains. What secrets do they guard here, inside ancient walls that were built long before humans set foot on Athenas?

Vehicles you encounter are yours for the taking. You can always digistruct a vehicle at any Catch-A-Ride station, but there's also the option of a quick hijacking if aggressive bandit drivers get too close. 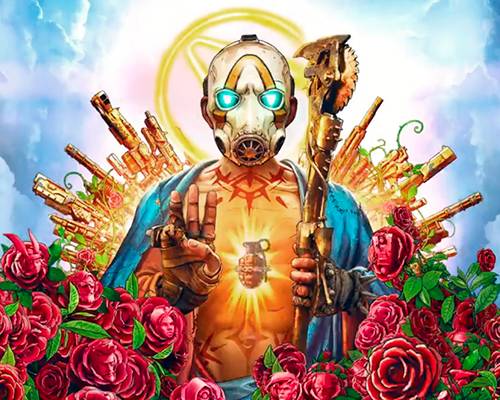 The original shooter-looter returns, packing bazillions of guns and an all-new mayhem-fueled adventure! Blast through new worlds and enemies as one of four brand new Vault Hunters - the ultimate treasure-seeking badasses of the Borderlands, each with deep skill trees, abilities and customization. Play solo or join with friends to take on insane enemies, score loads of loot and save your home from the most ruthless cult leaders in the galaxy.

Tales from the Borderlands